Destination
Disclosure: This article may contain affiliate/compensated links at no extra cost to you, for more information you can read my disclaimer
Pin52
Share
Share
52 Shares

Costa Rica is a popular vacation destination because it has famed beaches, excellent surfing conditions, and a beautiful landscape.

However, there is so much more that makes Costa Rica great than just its lush rain forests, amazing mountainous regions, blue waters, and climate.

Below are some fun facts about Costa Rica that will only leave you wanting more and having you book your ticket to go visit.

1. Costa Rica is one of the happiest places in the world.

The warm weather and the beautiful landscape probably play a large role in this. The government also takes good care of their people and has a good education and healthcare system, for example.

People are just free to live a carefree and happy life. The number 1 reason tourists keep going back to Costa Rica is the people.

If you have been to Costa Rica, you will hear Pura Vida a lot. The term Pura Vida comes from Costa Rica and translates to “pure life.” For Costa Ricans, it’s a way of life where people are laidback, welcoming, and kind. The famous quote has been around for more than 50 years in Costa Rica and has become well-known around the world. It’s the national slogan.

The average person lives to 80 years old, those are some pretty great odds! The Pura Vida lifestyle is clearly working.

4. The Nicoya Peninsula is one of the top 5 Blue Zones in the world

A Blue Zone is an area where there is a higher than normal amount of people who live longer than the average person. The elders of the Nicoya Peninsula are more than twice as lucky to live to at least 90 and many live to over 100 years old.

The army was abolished in 1948 after the Costa Rica Civil War in the same year. Without having to fund a military, more money can go to things like education, healthcare, and pensions which all around is better for the country.

Costa Rica is lined by the Pacific Ocean on its left side and the Caribbean Sea on its right. Each side boasts different waves and has a bit of a different atmosphere.

7. There are 800 miles of coastline in Costa Rica

That’s a whole lot of ocean to enjoy. 8. There are over 200 volcanic formations in Costa Rica

Only 100 of those show any signs of volcanic activity and 5 are considered active volcanoes. Most of the volcanoes in the country are located in the Central Highlands in the north. Poas Volcano is very popular to visit and it has erupted 40 times since 1828. Another very active volcano is the Arenal Volcano which is currently in a “resting” phase. The other 3 active volcanoes include Irazú, Rincón de la Vieja, and the Turrialba.

9. Over 25% of the land in Costa Rica is conserved

Costa Rica is fighting global warming and saving its rainforests. They dedicate their land to national parks, reserves, and wildlife refuges. There are over 100 national parks and the country works hard to protect and preserve the eco-diversity of the 12 ecological zones.

10. More than 5% of the world’s entire biodiversity is in Costa Rica

To put that into perspective, Costa Rica only makes up .03% of the planet’s surface but hosts 5% of the world’s biodiversity. which makes it one of the most bio-diverse countries in the world.

12. The population in Costa Rica exceeds just over 5 million

Which is only 0.07% of the entire world population.

13. Costa Rica is a leader in renewable energy

Costa Rica uses renewable energy to generate more than 99% of its electricity. Most of the energy in the country comes from five renewable sources which include geothermal energy, hydropower, biomass, wind, and solar.

Costa Rica is working towards becoming the first carbon-neutral nation in the world. What a big feat and one to be proud of! Costa Rica is very eco-friendly.

14. Each morning at 7 am, radio stations throughout the country play the national anthem

It’s a great way to wake the country up in a very patriotic way.

15. Costa Rica is made up of seven Provinces

There are seven provinces in Costa Rica and include San Jose, Alajuela, Heredia, Cartago, Guanacaste, Limon, and Puntarenas.

16. The official language is Spanish

However, many people are bilingual and usually speak English. This is because English is an international language spoken by most tourists so it’s very common to know English as a second language.

17. A soda is a small restaurant often family-owned that services traditional meals at a very inexpensive price

It is a great place to eat when traveling to Costa Rica, not only to save money, but to experience and try local food.

18. A pulperia is a neighborhood store that sells essentials, like a convenience store

Think 7-11, but not so commercialized.

People in Costa Rica call themselves Ticos and Ticas. It comes from the diminutive suffix of “tico” which is used to end many words in Costa Rica. Tico is a male and Tica is a female and it’s used casually in conversation.

20. There is a large ex-pat community in Costa Rica

Many people are intrigued by the Costa Rican way of life and move there to live a true Pura Vida lifestyle. Expats can live comfortably and there are great programs for retirees to move to Costa Rica. 21. Gallo Pinto is the most popular breakfast dish and includes rice and black beans

It’s very important to the culture of Costa Rica and it’s the national dish. You have to try it before you leave.

22. There are four UNESCO World Heritage Sites in Costa Rica

On average, it costs roughly $1,500 a month for a single person or $2,000 to $2,500 a month for a couple to live in Costa Rica. This can range based on lifestyle differences and includes housing, utilities, food, transportation, healthcare, and even some activities.

24. The capital of Costa Rica is San José which is located in the San José province

It’s the most populated place in Costa Rica and is often frequented by tourists. It’s also the most modern place in the country and has a really mild year-round climate which makes it attractive.

25. The most expensive place to live in Costa Rica is in San José, not near the beach.

It’s the most city-like and has the largest population which makes it expensive to find housing in downtown.

26. The cheapest place to live in Costa Rica is Cartago

This is because this province is landlocked so it doesn’t get as many tourists and it’s not near any of the large cities. The area has a ton of history so it’s still worth exploring and would make a great place to stay to save money.

27. Costa Rica is one of the safest places in Central America

Making it just another reason to visit. The best part is you could do all of it in one day! The total drive from coast to coast takes about 7 hours but you could make some cool stops along the way! It’s a great way to not have to choose one coast over the other.

29. The sun rises and sets at almost the same time every single day year around

This is because of its proximity to the equator. At least you never have to worry about readjusting to the sun’s new sleep schedule, right?

30. Costa Rica only has two seasons

The seasons can be split into just two periods: dry season and wet season. The dry season runs from December to April and the wet season from May to November.

31. There are a total of 29 national parks in Costa Rica

That is a lot of national parks for such a small country.

32. The national animal is the white-tailed deer (think Bambi)

Not a monkey, sloth, or exotic bird that comes to mind when you think about Costa Rica. You’ll even find a deer on the 1,000 colones bill. 33. That brings us to fact number 33: the currency in Costa Rica is the colon

Costa Rica has some of the prettiest money in the World, they have even won awards for their bright colorful bills.

34. Coffee beans have been a large export for Costa Rica for many years 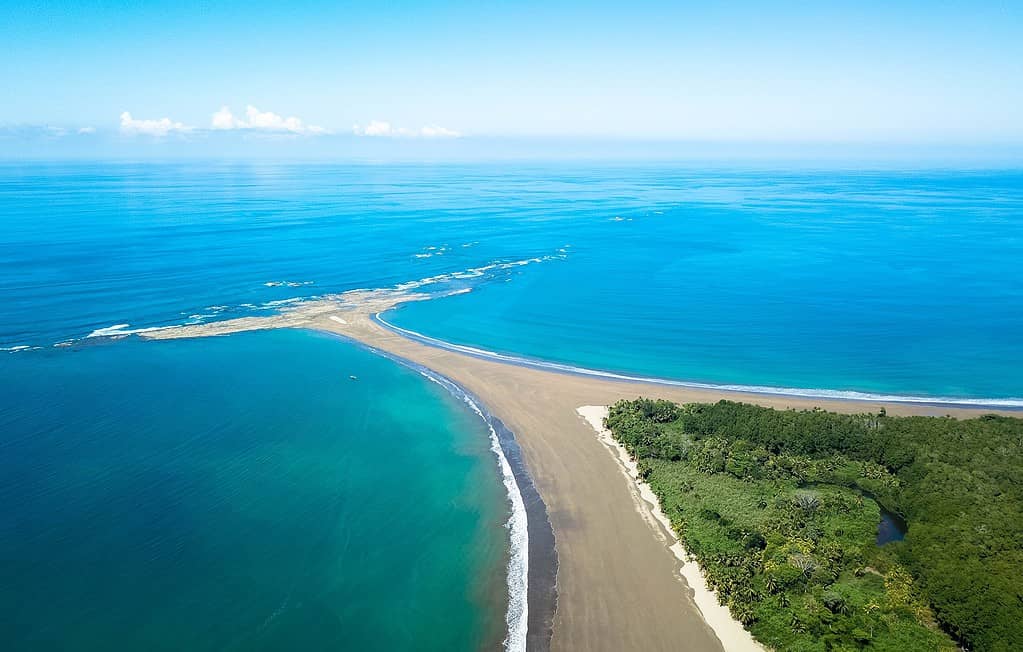 It looks like the shape of a whale’s tail when seen from above and on top of that, it’s actually a great place to whale watch. Which is one of the top things to do in Uvita

36. There are eight indigenous groups in Costa Rica

About 2% of the population identify with indigenous roots and continue to carry on their heritage, language, and culture.

The only way to give directions was to say 75 meters from the “soda” up ahead or take a left 100 meters south of the “pulperia.” In 2012, street signs became more regulated, but you still won’t really see them.

38. Tourism is the leading foreign income earner for the country

39. Before Tourism, bananas used to be the top income earner

The top foreign income earner used to be bananas until 1995 when tourism took over the number one spot. Coffee is another big export for the country.

40. Costa Rica is located on the Central American Isthmus.

An isthmus is a narrow piece of land that connects two larger pieces of land across a body of water.

Costa Rica loves and respects women and their mothers. So much so that mother’s day is actually a bank holiday in Costa Rica. They want to ensure that everyone celebrates it the way they should.

“Tico Time” is widely used throughout the country. Just like the Pura Vida saying goes, people in Costa Rica are generally laid back and don’t worry about time too much. If you have a meeting at 3 pm, don’t actually expect the person to be prompt because they very well could show up an hour later.

It is common to refer to your partner as your goat in Costa Rica.

45. Costa Rica is very small and only about the size of the state of West Virginia in the United States

For such a small country, Costa Rica still has many reasons to visit.

Christopher Columbus stumbled upon Costa Rica on one of his trips to the United States. He named it “Costa Rica” meaning “Rich Coast” in hopes that there would be lots of gold. When they did not find any gold, most of the European settlers left.

47. Poas Volcano has the second-largest crater in the world.

Poas Volcano one of Costa Rica’s largest volcano’s not only has the largest craters in Costa Rica but also has the second-largest crater in the world.

This is especially helpful when you’re lost and trying to find your way.

49. In every single town in Costa Rica, has to have a church, soccer field, and a bar

If they don’t have these three things they can’t be considered a town. Costa Ricans want to ensure everyone can drink, play soccer and go to church.

50. Guaro is the local liquor of Costa Rica

It’s made from sugar cane and has a unique flavor. You should be very careful when drinking it. It is cheap and will most likely leave you with a hangover the next day.

If you didn’t have a reason to visit before, hopefully, something on this list strikes your interest and you will book your ticket today.

Do you have another fun fact about Costa Rica that is not mentioned on this list? Say so in the comments below. Best Time of Year to Go to Costa Rica