Florida is one of the most popular states to visit in the US for numerous reasons. First of all, it’s super warm and has excellent, year-round weather.

Because of this, it’s where many senior citizens choose to retire because it’s also very affordable. While there is a large older population, Florida is also a hub for younger generations with its huge party scene and the great weather makes it super attractive to people of all ages.

If you’re headed to Florida and looking for a great city to go out in, this list will provide you with the best places to party in Florida.

Florida is widely known for its nightlife and has tons of bars, clubs, and other party places throughout the state.

Florida is one of the largest party locations in the United States. The sunshine state is always in for a good time.

While it has a breathtaking coastline and tons of things to do during the day, Florida nightlife is just as popular as its day-to-day life, if not more popular.

One of the most infamous times of year to visit Florida is during spring break and it’s one of the country’s most popular spring break locations.

Thousands of students from all over the US visit Florida in February and March to get their party on. Florida receives millions of visitors each year to see how much fun it can be.

Besides spring break, Florida is fun all year long. So if you’re ready for a good time, look no further.

While Florida has some of the best clubs and bars, it also has some of the most beautiful beaches in the country, amusement parks, museums, festivals, and fantastic weather.

Best Places to Party in Florida

The best places to party in Florida happen to be beach cities. Because who doesn’t want to party in the sand?

After a long day swimming in the ocean and relaxing in the sun, everyone needs a night out.

Since the beaches are the most popular attraction in Florida and where most tourists head when visiting Florida, the fun follows.

Hopefully, if you are heading to Florida, you are a fan of the beach, because most of these places are on the water. 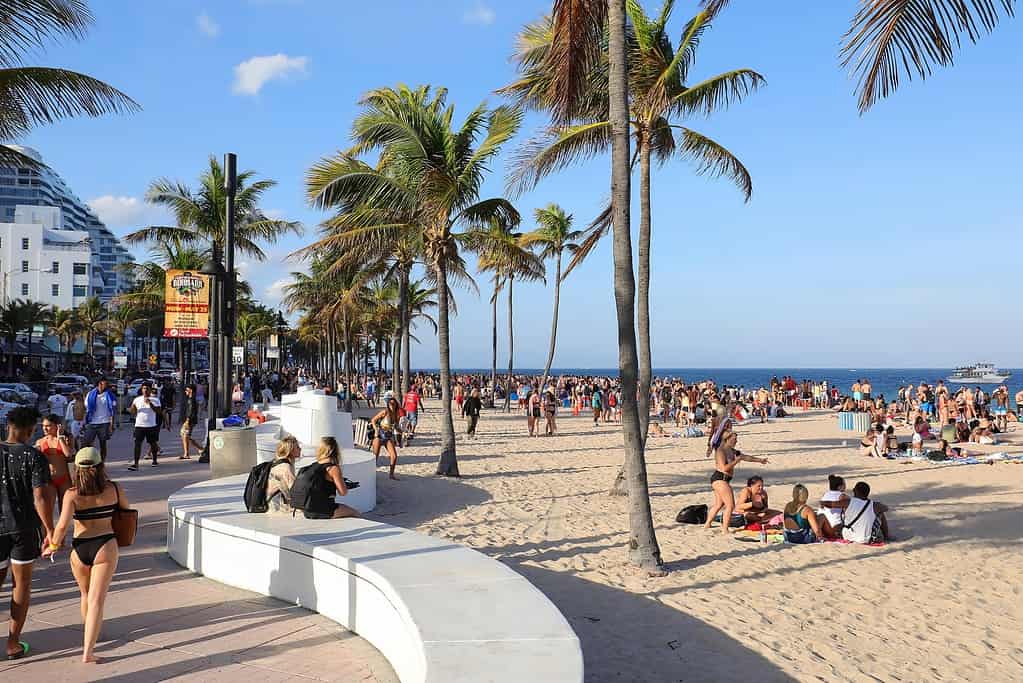 Fort Lauderdale is considered party central during spring break. You can find thousands of college students huddled on the beach in February and March.

Right off the beach, there are tons of restaurants and bars that get rowdy, especially at night. It’s a great place to enjoy the beach during the day and grab a drink any time of day while enjoying the ocean views.

Being so close to Miami, you can enjoy a similar nightlife experience but without the big price tag of its neighboring city. Another heavy spring break location, Panama City Beach is a great party location in Florida. You’ll find people with a drink in hand at all hours of the day.

There are also many beach bars and restaurants right along the coast. In addition, Panama City is home to the largest nightclub in the US, Club La Vela.

It has 48 bars, ten themed rooms, and a beachside swimming pool, yes you read that right. On Wednesdays, girls get in for free and are given two free drinks.

This club is a must-visit in Panama City if you’re heading out on the town. It’s also considered one of the more affordable party areas in Florida, so if you’re hoping to have fun while saving a buck or two, this is a great area to check out. St. Pete Beach is a great option if you’re looking to have a good time in Florida without visiting one of the infamous spring-break beaches.

It has a vibrant nightlife, but it’s not as well known for being a party location as other cities around Florida.

St. Pete is less crowded than other party cities but has some of the most fun bars. So if you’re looking for a place to have fun, drink, and party without the major crowds, this is the best place in Florida for you.

It’s the best low-key yet fun place to party in Florida. Daytona Beach has concerts at the Bandshell every Friday and Saturday night from May to September and the best part is they’re free.

Tons of people flock to Daytona for this event to enjoy music at the amphitheater and it brings in many people.

Daytona Beach is a popular spring break destination and it’s the birthplace of the NASCAR race, so it’s a busy place throughout the year.

Because of the association with the world-famous race, there are a ton of bars and clubs related to the motor speedway, like biker bars and rowdy saloons that create a fun and exciting atmosphere. Miami Beach is known throughout the world for its parties and wild, vibrant nightlife, and it’s the most famous city in Florida.

South Beach is a neighborhood in Miami and is the most popular beach strip in the city with many clubs and bars nearby. Not only that it’s one of the world’s most visited and popular beaches.

LIV nightclub is the most infamous club in Miami because it’s the place where even celebrities like to party.

In Miami, you don’t ever have to wait until night to have fun. Miami has some amazing daytime pool parties that rival the likes of Las Vegas.

Along with some of the most popular nightclubs, Miami has museums, tons of events, and so much to do. Jacksonville is the largest city in Florida and one of the oldest. Some of the clubs have been open since 1920.

There is a mix of venues and places to party, depending on what you’re interested in. There is also a growing beer scene in Jacksonville with tons of craft beers, if that’s more your thing.

Be sure to check out the breweries in this city. The Jax Ale Trail even provides a brewery passport so you can easily try all the best beer creations in the city.

Tampa is full of fun things to do. It’s home to some of the best parties in the state, and if you’re into amusement parks, it’s home to Busch Gardens.

Ybor City has tons of culture, great food to try, and a ton of fun bars and clubs. Tequilas is an excellent bar in Ybor city with over 100 different tequilas to try. Good luck tasting them all!

It also hosts Gasparilla, which is the largest pirate festival in the United States, if that doesn’t sound like fun you probably shouldn’t be reading this list. Another major party location in Florida is Key West. The Florida Keys are the southernmost point in the United States, enjoying warm, year-round weather.

The Keys are a fantastic place to visit off the mainland but still connected by the Overseas Highway.

This location is very scenic and has tons to do. With good weather year-round, people in Key West are happy-go-lucky and ready for a good time.

After spending the day swimming, snorkeling, jet-skiing, and enjoying the warm weather, grab a drink with friends and enjoy one of the many bars in Key West.

The island is small but mighty when it comes to drinking. While it’s only 4X2 miles in size, there are 360 different liquor licenses, meaning you could grab a drink almost anywhere.

It has the most bars per capita in the United States.

Places to drink range from low key bars to vibrant clubs. In general, Key West is a fun place to visit, and it feels like you’re on a tropical vacation rather than in Florida.

The home of Mickey Mouse and the rest of the Walt Disney Family has its fun too. Orlando has a ton of nightlife, from walking concerts and bars at Disney Springs to comedy shows, live music, and many bars and clubs.

You can visit the amusement park by day and party by night! It is a great party destination and you will never get bored here. With over 9 theme parks to visit while you are in Orlando, I can ensure you that you won’t run out of things to do. Hollywood Beach is considered to have one of the coolest beaches in Florida. The ocean is a drop-dead turquoise blue, and the sand is powdery white. It is surrounded by a beautiful boardwalk.

It has a palm tree-lined boulevard 2.5 miles long, with bars, restaurants, and shopping lining the coast. Hollywood Beach lives up to its name.

It’s a glamorous place with tons of beach resorts and lovely places to grab food and a drink as well as fun places to party. It is a great place to come, hang out, enjoy the beach and of course party. Saint Augustine Beach is considered to have one of the prettiest beaches in Florida. It also happens to be the oldest city in the United States. There is so much history and fun things to do while you are here.

If you enjoy a more cultural experience than you should head to Saint Augustine, plenty of history and cultural things to do during the day, and loads of bars, pubs, restaurants, and breweries to hit up at night.

Make sure to do a ghost tour and take the trolley while in town.

If you’re looking for a vacation filled with carefree fun, partying, and good vibes, look no further than Florida.

The Sunshine State is known for its party-inducing environment, especially around spring break season.

You’ll enjoy warm weather, gorgeous ocean views, and all the bars and clubs you could ask for in Florida.

Hopefully, you found a place on this list that is right for you. So go get your party on in Florida.

Do you have a different best place to party in Florida that wasn’t mentioned on this list? Say so in the comments below Top 10 Off The Beaten Path Places In Florida 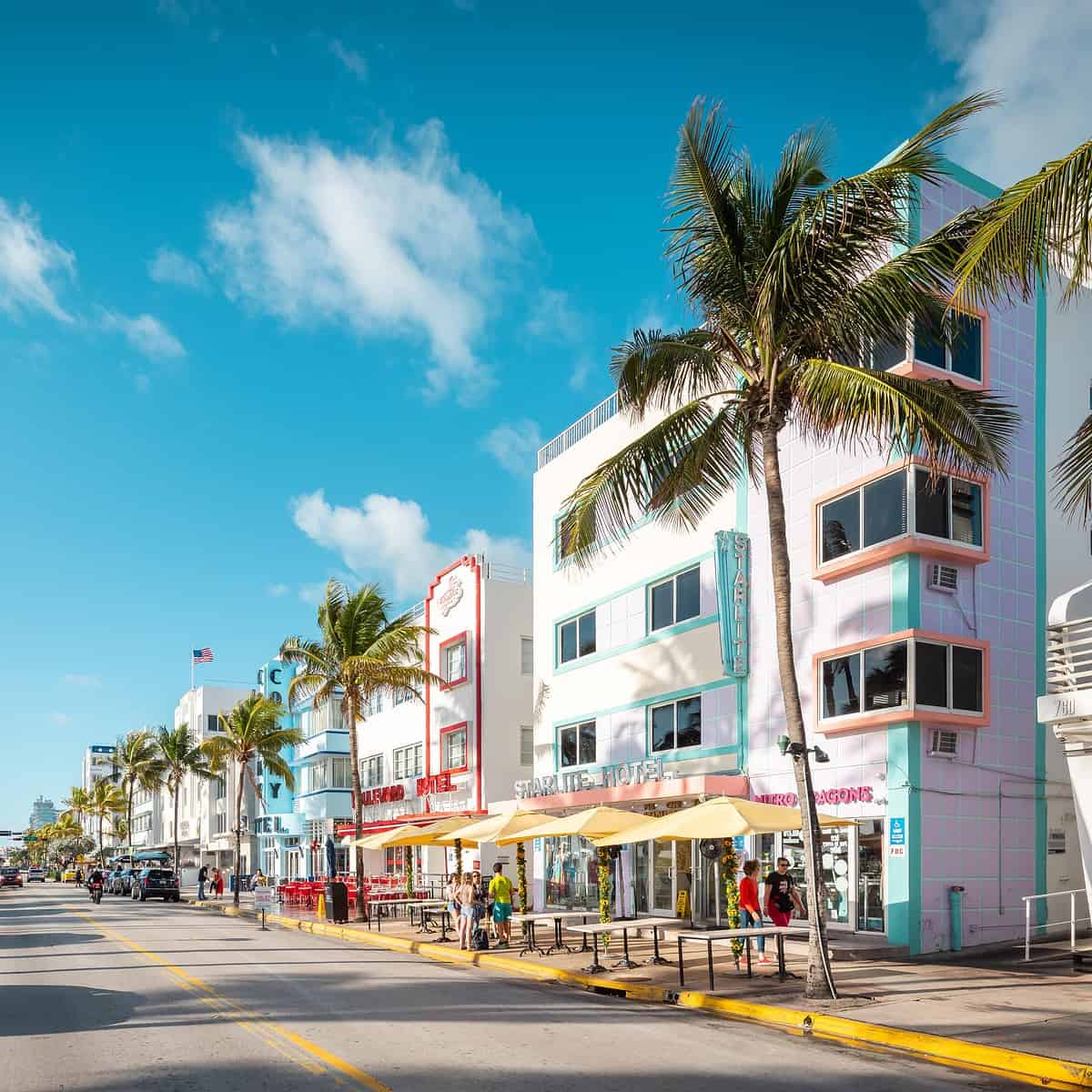