Destination, Food
Disclosure: This article may contain affiliate/compensated links at no extra cost to you, for more information you can read my disclaimer
Pin298
Share
Share
298 Shares

Planning a trip to Cuba? To get the full cultural experience in Cuba, you will want to eat and drink like the locals. Cuban drinks are some of the best around, so you don’t want to miss out. This is mainly due to their Cuban rum. You can put it in almost anything.

Traditional Cuban drinks usually always have Cuban rum in them and more often than not they will use Havana Club. However, if you are wanting a Cuba Libre, you might be surprised to learn that it is not made with Coca-Cola.

Coca-Cola is non-existent in Cuba. This is part of the embargo act that doesn’t let any American products in.

You are able to find cola drinks, just not the brand Coca-Cola. So a traditional Cuba libre is served with cola and lime juice, but not Coca-Cola.

Cuba is not just famous for its Havana Club rum and its popular cocktails. They also have award-winning coffee, fresh coconuts served up with lime, and unique sodas. Cuba’s coffee is some of the best around. They all drink cubanitos. It is a very strong coffee, very similar to Italian espresso, but stronger and sweeter. It has a certain kick to it that will wake you up in the morning and keep you going all day.

Stop by one of Cuba’s local coffee restaurants where locals stand around all day drinking these delights. All the coffee beans are grown and harvested locally, so you can ensure you are getting the freshest coffee around. It is a large part of the culture, so even if you are not a big coffee drinker, you still need to try it. 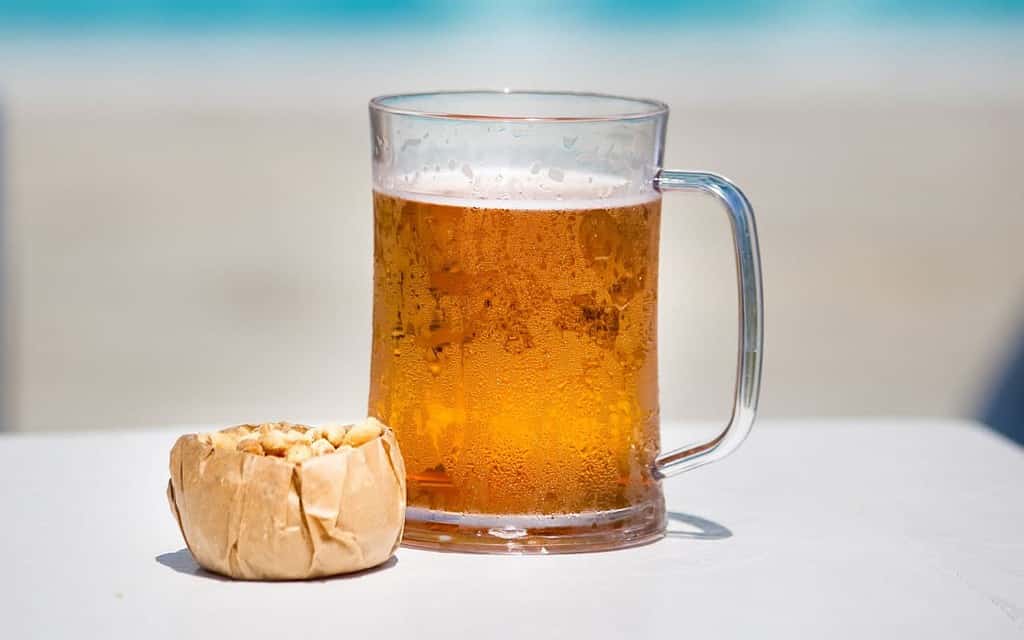 Whereas Buchanero is a slightly darker beer with a little more flavor to it. Try both to see which one you prefer.

Cubans love their beer and it is very much a part of their culture.

If you are a draft beer lover, you will be in trouble, because it is not popular in Cuba. All their beer comes in bottles.

You will see crates and crates of beer bottles pilled up outside the bars, cafes and overflowing into the streets.

The beer company normally only comes around once a week to pick up the bottles. They wash them and they are reused. The best kind of recycling 🙂

Nothing says vacation more than a nice refreshing piña colada in hand, on the beach or sitting by the pool. Cuba is proud of its Piña Coladas, they originated there. So you can ensure they are the best.

Normally served with white rum, Havana Club to be exact, coconut cream, pineapple juice and just a touch of lime juice. They are to die for. Be sure not to leave without having one.

Cuba is known for its daiquiris, they were invented and perfected there. It is the perfect mix of white rum and lime juice. You can’t leave without trying one and the best place to do so is at the La Florita in Havana. This was the original birthplace of the daiquiri.

Ernest Hemingway was known to only drink his daiquiris there. Once you go there and try one, you will understand why.

Most everyone has heard of the mojito it is probably the most popular drink to come out of Cuba is.

It is such a popular drink you can almost find it anywhere in the world.

Light, refreshing, and easy to drink. You cannot come to Cuba without having a mojito. If you are in Havana, you have to drink one at La Bodeguita del Mundo. The birthplace of the mojito and another favorite spot with the tourists and Ernest Hemingway.

The name says it all. It is a rum and cola served with a wedge of lime. Easy to drink and served everywhere in Cuba. Buy one on the street and they will normally throw in a Cuban cigar to compliment it. The true Cuban experience.

Be sure to have a Cuban cigar when you are in Cuba, even if you don’t smoke it is worth it to try it. They are dipped in honey before they smoke them which makes it so sweet tasting.

Similar to a screwdriver, but made with Havana rum instead of Vodka. All the drinks in Cuba are made with white rum, so hopefully, you like it.

It is fresh orange juice and Havana rum, what the locals drink after they have had their morning coffee or with their morning coffee. You will notice Cubans drink around the clock, but you will never see them too wasted. They just enjoy staying tipsy all day long. Nothing beats sitting on the beach and drinking a fresh coconut. Cuba doesn’t fail to deliver on this. Camp out on the beach for the day and have fresh cold coconuts cut open right in front of you. They will happily add some Cuban rum to it as well to give it an extra kick for only $1.

If you are not wanting to drink rum, lime juice always goes nice with coconut water and is so refreshing on the beach. They are fresh and they are cold. Perfect to enjoy in the hot sun. Fanta was created because it was the anti-coca-cola. When coca-cola was banned in 1962, Cuba needed another sugary carbonated drink to replace it. In came Fanta, it was orange, and it was orange for a reason.

It was known as the anti-American soft drink. Cubans didn’t want coca-cola in their country. To this day there are only two countries where coca-cola is not sold in.

One is Cuba and the other is North Korea. Cuba has its own cola soft drink that is owned and operated by its government. Which might be the reason they still continue to keep coca-cola out. This is the Cuban version of a Bloody Mary. It comes with a salted rim, tomato and lime juice and served with of course like most drinks in Cuba it is made with rum.

What other rum would they use in Cuba besides Havana Club.

It is the perfect drink for when you have had too many mojitos the night before.

What Cuban Drinks You Shouldn’t Drink

Stick to bottled water. It is easy to find and all the tourists drink it. As long as you stay clear from the tap water in Cuba, you should be fine.

Ice cubes are normally ok because they are made with filtered water. But it is always a good idea to ask before you request them.

Enjoy all the good drinks that Cuba has to offer, it is a unique place and you will feel like you traveled back in time to get there. Especially with all the Cuban Cars around. They are all old and classic. Cuba makes you feel like you are in an old movie.

It is a unique and special place that everyone must visit.

Are you looking for more tips on Cuba? Things to do in Todos Santos, Mexico