Destination
Disclosure: This article may contain affiliate/compensated links at no extra cost to you, for more information you can read my disclaimer
Pin1K
Share
Share
1K Shares

Munich for Oktoberfest is something everyone needs to add to their bucket list items. It is an experience like no other. Before you pack your bags and head out there it is wise to brush up on some Oktoberfest Tips to help you have the experience of a lifetime.

Oktoberfest is all about the singing, the dancing, the bratwurst, pretzels, and most importantly, the beer. I mean, how can you forget about the beer?

It is the World’s largest beer festival bringing in over 6 million tourists a year over its 3-week span.

Every year at Oktoberfest millions of liters of beer are consumed. Tourists come from all over the world to help the Germans celebrate by singing, dancing, and of course drinking beer.

So much beer is consumed that in 2017 Munich broke their record and consumed over 7.5 million liters of beer. Now that’s a lot of beer!

Let’s jump into a little bit of Oktoberfest history before we dive into Oktoberfest tips.

Starting back in 1810, Oktoberfest began as a celebration of the royal wedding between Crown Prince Ludwig and Princess Therese. Hacker-Festhalle Tent with some locals

The next year the celebration continued with horse races, but the locals were starting to enjoy the specially brewed beer more than the horse racing.

In the beginning, Oktoberfest was nothing more than a small beer stand outside. The locals would stand around the beer stand and enjoy the horse races.

It grew in popularity and the locals started calling the festival Wiesn, the colloquial term for fairgrounds. It is still called this today, but it is better known around the world as Oktoberfest.

By the late 1800s the beer had become the main attraction, so they decided to put up their first beer tent.

The rest of the fairgrounds were taken up by a fun fair, providing amusement and activities for the kids, and beer drinking for the adults.

The horse racing slowly died out and beer drinking became the main event.

Not only is Oktoberfest the largest beer drinking festival, but it is also the largest festival in the World. For anyone that has ever been will know why. They brew up a special magical beer, that is only for Oktoberfest. It’s refreshing, tasty and somehow you are able to drink liters and liters of it, without getting a hangover!

It is almost as if the more you drink the better you feel the next day.

Which makes it almost too easy to stay in the tents all day, dancing on the benches, singing, drinking and meeting new friends.

As you watch in amazement as the beer maids somehow miraculously carry 10 liters of beer at a time, weaving through the crowded tents for delivery to the thirsty fairgoers.

Oktoberfest Tips: Things To Know Before You Go If you are planning to visit Oktoberfest for 2022, know that it actually starts September 16th – October 3rd.

Most people think that Oktoberfest is in October, which it is. But it really starts in September and only runs for 16 days, ending at the beginning of October.

Where To Stay in Munich during Oktoberfest

The most important Oktoberfest tip is to be sure to book your accommodation early. Hotels and Hostels are in high demand for Oktoberfest, with some people booking as early as a year in advance.

The closer you are to the fairgrounds, the more expensive your place is likely to be. I like to use Airbnb or Bookings for most of my accommodation bookings.

If you are not staying within walking distance of the fairgrounds, it shouldn’t matter too much.

The subway lines U4 and U5 will take you directly to the festival to stop Theresienwiese. If you book a place that is close to these lines, you won’t be far away.

Munich is an amazing place to visit in Germany. Not just for Oktoberfest. There is so much to see and do. Don’t forget to take advantage of the amazing day trips from Munich while you are there.

Once you are in Munich, it is pretty easy to get around by subway. The subway has a stop right at the Oktoberfest fairgrounds so it is really easy and inexpensive to get to.

The subway lines U4 and U5 will take you directly to the festival at the stop ‘Theresienwiese’.

Oktoberfest Tip: If you think you are lost, just follow the crowd dressed in lederhosen and dirndls, they will lead you there.

When you walk into the festival grounds, there is so much to take in – lots of carnival rides, delicious food vendors, and most importantly, the beer tents.

There is no entrance fee to get in and all the beer tents are free as well. You’ll just pay for food, drinks, and rides.

Looking for something to do after Oktoberfest. Germany is an amazing country with so much to see, so why not take a road trip from Munich to Mittenwald?

There is so much to see and do in Germany you will never get bored.

How Much To Expect To Pay For Beer

Most tents only sell by the liter which typically cost around 12 Euros, or about $14. The beer is specially brewed for the festival and can only be served there.

Where To Buy Your Oktoberfest Outfits

Another Oktoberfest tip, if you are wanting the official look of Oktoberfest, wait to buy your dirndl or lederhosen until you get to Munich. Don’t try to buy one online, because they will look fake and cheap.

There are plenty of stores in the old town that is filled with lots of options.

If that is out of your budget, you can also pick up some second-hand ones while you’re here, but be aware everyone dresses up so you will stand out if you are not in traditional trachten (German outfits). Plus it is half the fun!

How To Make A Table Reservation At Oktoberfest

If you are wanting a table reservation, DO IT NOW! Tables book up fast.

Tables are free to book, but it is mandatory that you purchase meal vouchers and purchase food from the tent you make the reservation.

It is not necessary to book a table, but if you want a table without making a reservation be sure to get to the tent early, as tables fill up fast.

If you want to book a table, you have to do it through the tent itself. Here is my Oktoberfest Tip Guide for the Oktoberfest Tents and how to make reservations.

Late Night Tents: Käfers and Weinzelt open until 1:00 am when all the other tents close at 10 pm

Map of the Oktoberfest Tents

1. Hydration- Oktoberfest is a marathon, not a sprint. It is normally an all-day event.

2. Arrive Early- If you want a good spot in a tent you have to get there early (before 11 am). The tents fill up fast and once they are full, they don’t let more people in. 3. Enjoy the Rides Early- If you are wanting to enjoy the rides, I always suggest doing it before you have had one too many liters. Otherwise, you end up looking like these guys.

4. Pick a Meeting Spot- It is easy to get lost or lose your friends in Oktoberfest, and sometimes even lose your phone. It is best to pick a meeting spot and times in case this happens with your group.

5. Bring Cash- It is best to pay for your drinks with cash. The barmaids are very busy don’t like dealing with the extra step of having to charge your credit card.

6. Remember to Eat-  It is easy to get caught up with all the drinking and singing. Don’t forget to eat.

7. Bring comfortable shoes you don’t mind getting dirty-  I think the reasons are obvious here.

8. Don’t Dance on the Tables – Unless you are ready to down your drink. Standing on the tables in Oktoberfest is a sign that you are going to pound your whole drink.

Are You Ready For Oktoberfest In Munich? 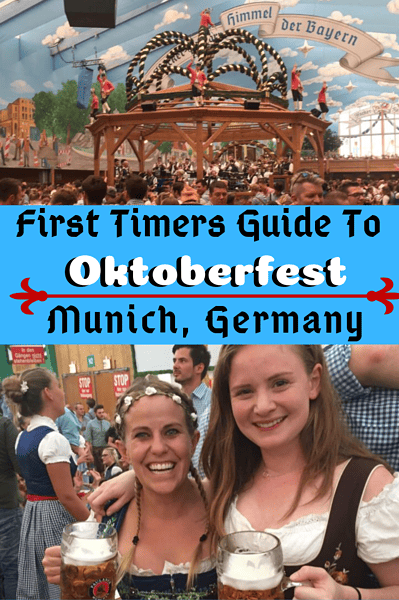